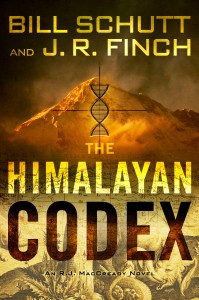 “Schutt and Finch provide a textbook example of how to make the fantastic easy to buy into with their superior second Crichton-esque thriller.”  Publisher’s Weekly (Starred Review)

“Looks like Schutt and Finch are filling the void left by the passing of Michael Crichton.”  James Cameron

“James Rollins and Steve Berry fans who relish a heaping dose of scientific and historical intrigue in their thrillers will find plenty of both here, as well as cameos by such historic figures as JFK and Khrushchev.” Library Journal

“While Hell’s Gate was a brilliant start to this terrific new series, Schutt and Finch top themselves with this nerve-wracking, heart-thumping thriller that is perfect for fans of Michael Crichton and James Rollins.”  The REAL Book Spy

“If you haven’t read the first in the R .J. MacReady series, don’t worry. Schutt and Finch give a great, brief backstory of important elements, allowing the reader to jump straight into the immediate story with no loss of character nuance. The Himalayan Codex is complete with nail-biting tension, historical intrigue, scientific curiosities, and plenty of action.” CriminalElement.com

The deeper Mac and Yanni plunge into the unknown, the more certain it appears that they won’t make it out alive.

In the wake of World War II, zoologist and adventurer Captain R. J. MacCready is sent to the frozen mountain valleys of Tibet to find a creature of legend that may hold the secret to humankind’s evolutionary future—or the key to its extinction—in this explosive follow-up to Hell’s Gate.

It is 1946, and the world is beginning to rebuild from the ashes of the devastating war. Marked by the perilous discoveries he encountered in the wilds of Brazil, Captain R. J. MacCready has a new assignment on the other side of the globe—a mission that may help him put the jungle’s horrors behind him. He is headed for the Himalayas, to examine some recently discovered mammoth bones.

Arriving in Asia, Mac knows that the bones are only a cover story. He’s really there to investigate an ancient codex allegedly written by Pliny the Elder, a fascinating text filled with explosive secrets. The Roman naturalist claimed to have discovered a new race of humans, a divergent species that inspired the myth of the Yeti and is rumored to have the ability to accelerate the process of evolution. If Pliny’s assertions are true, this seemingly supernatural ability holds unlimited potential benefits—and unlimited potential for destruction.

Charged with uncovering more about this miracle species, Mac and Yanni set off into the remote mountain valleys of Tibet, using the codex as their guide. But the freezing climate and treacherous terrain are only the beginning of the dangers facing them. They must also contend with the brutal Chinese army and a species of native creature even the Yeti seem to fear. The deeper Mac and Yanni plunge into the unknown, the more certain it appears that they won’t make it out alive.

Schutt and Finch provide a textbook example of how to make the fantastic easy to buy into with their superior second Crichton-esque thriller featuring field zoologist R.J. MacCready (after 2016’s Hell’s Gate). In 1946, Maj. Pat Hendry visits Mac at his offices in New York City’s Metropolitan Museum of Natural History and shows him jawbones from a dwarf mammoth that suggest the creature had two trunks. Hendry reveals that the bones came from a remote part of Tibet known as the Labyrinth, which may also be the site of an even more amazing discovery—an incomplete codex believed to have been written by Pliny the Elder, which describes the ancient Roman naturalist’s encounter with something in the Labyrinth that could be “the key to shaping life itself.” Mac agrees to travel to the Himalayas to find and recover whatever that something is. Schutt and Finch enhance their suspenseful plot with descriptions of unusual but convincing life forms. An extended author’s note at the end explains that such speculation is grounded in science.

R.J. “Mac” MacCready is a fun, Indiana Jones-like character who is quickly setting himself apart from others in the genre. The post-WWII setting comes to life, as the authors do a phenomenal job nailing even the smallest details that help transport readers back in time. Likewise, they go to great lengths to keep the really sophisticated science both simple and entertaining, striking a great balance and making everything easy to understand.

The story reads fast, and there’s plenty of action to go along with the top-notch suspense. Thoroughly explaining both the good and bad of such a startling discovery, the authors will have readers conflicted on which outcome they hope for–but keep them flipping fast and furiously to see how it all plays out. In the end, things are tied up with a satisfying, well-thought-out conclusion that is explained further during a lengthy author’s note that follows the final page.

While Hell’s Gate was a brilliant start to this terrific new series, Schutt and Finch top themselves with this nerve-wracking, heart-thumping thriller that is perfect for fans of Michael Crichton and James Rollins.

Poets of the Tabloid Murder Interview with Steven Nester

After Hours AM Interview